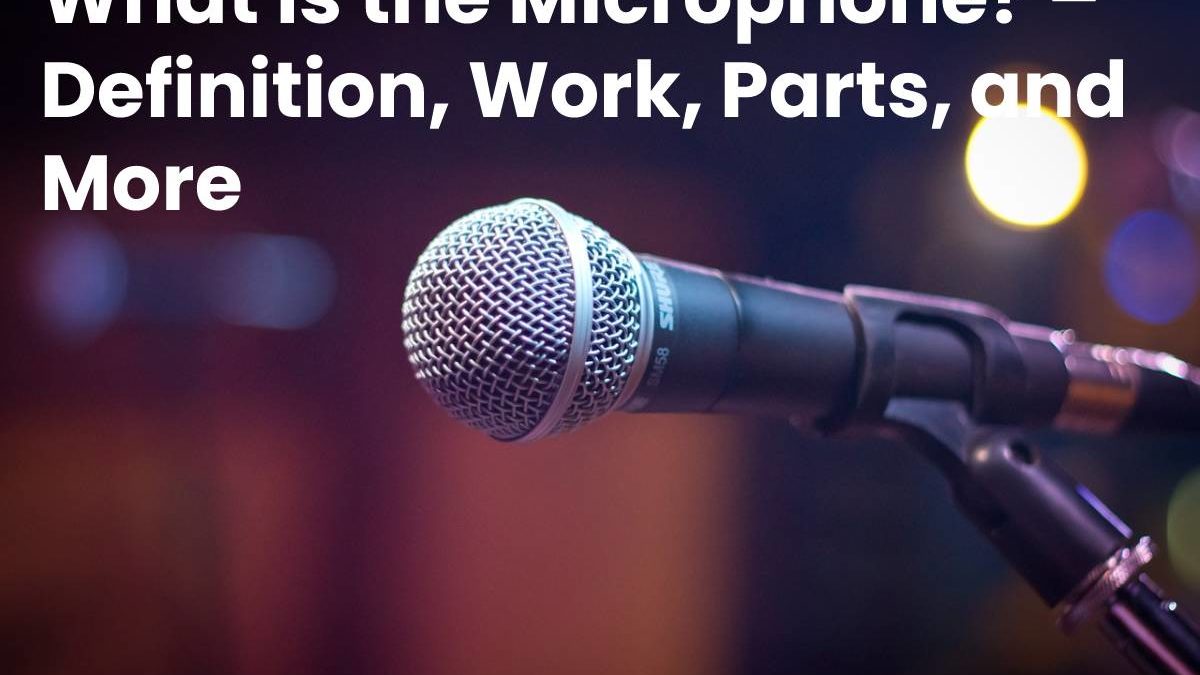 The word microphone we have to establish that it has its etymological origin in Greek.

And it is the result of the sum of several lexical components of that language.
-The word “mikros” can be translating as “small.”
-The noun “phone” is synonymous with “sound.”

A microphone is a device that converts sound waves into electrical signals.

And also, In this way, it manages to amplify them.

These devices generate electrical currents based on changes in the pressure of the air.

To achieve this, they can resort to different processes and techniques, such as electromagnetic induction or piezoelectricity.

Generally, they must be connected to a preamplifier so that their signal is in a position to be processed, recorded, and reproduced in a speaker ( loudspeaker ).

Also read: What is Peppertap? – About, Description, and More

What is the Work of Microphone?

The microphone acts in reverse of the way a speaker works.

It is a system that captures the sound and encodes it into an electrical signal, and then transmits it.

For this to happen, a series of actions take place, which is mentioning below

What are the Parts of a Microphone?

Sometimes called a pickup, although this term is more common when referring to a device that receives vibrations from instruments, such as an electric guitar.

And also, It is the most delicate component of the entire microphone structure.

It is a kind of membrane that captures sound vibrations and is attached to a system that changes these waves into electricity.

It is the microphone capsule and is built in different ways, depending on the kind of transducer.

And also, it allows the microphone to classify into different types: condenser, dynamic, carbon, etc. It is the piece in charge of transforming sound into electricity.

It is the one that serves as protection to the diaphragm.

Absorbs sound shocks (such as “b” and “p”) and physical shock caused by falls.

It is a container where the elements of the microphone are set.

In those that are handheld, the casing is made of light metal but at the same time resistant.

Through the connector, the electrical signal is carrying to the console.

They are commonly male XLR type connectors. In wireless or cordless models, the connector is replacing by a radio frequency transmitter.

Which sends the signal by electromagnetic waves.

What are the Characteristics of a Microphone?

Microphones do not pick up sound in the same way from all sides.

Directivity is the characteristic that indicates from which direction the sound better picks.

Knowing the directivity patterns of our microphones is extremely important to position them in recordings correctly.

Capture in one direction only.

Some super directional models have a very narrow and long beam to collect sounds from particular places and long distances.

They are ideal for capturing animal noises in nature.

This type of microphone is known as a gun.
As the name suggests, it is shape like a heart.

These microphones signal better when you speak to them from the front, although they always pick up some sound from the rear and side.

Capture on both sides of the capsule.

It allows the speaker to be placed in front of the speaker, recording the audio with the same intensity.

It is handy for actors to record face to face during a scene.

we talk, the microphone will pick up the audio correctly.

They are ideal for group scenes.

What is the Importance of Microphone?

By its nature, the microphone is at the forefront of most sound systems and recording applications.

If the microphone does not capture sound clearly and accurately, and with little noise, even the best electronics and speakers behind it will not produce optimal sound.

Therefore, it is vital to invest in quality microphones to maximize the performance potential of the sound system.

What are the Types of Microphones?

The SonidoNORTE team explained to us that there are three types of microphones.

These are the ones you usually see in karaoke systems or live audio situations.

They are also using recording studios in different cases.

These are the microphones you traditionally see in professional studio photography.

They are very striking, thin, classy, and robust.

It is subdividing into a condenser with a large diaphragm and a small diaphragm.

These microphones require external power to work, it is called Phantom Power, and it looks like a switch.

And also, The outstanding characteristics of condenser microphones are

The ribbon microphone is perhaps the least popular because they tend to be more expensive because of its complete.

They are fragile and require care when handling.

They call slat because they have a brittle sheet of metal that picks up sound and can break facially if the sound pressure reaches high levels.

And also, In current versions, this hardly happens, but it is better to be cautious.

Also read: What is Kannada Typing App? – About, Setup, Safety, and More

Review What is the Microphone? – Definition, Work, Parts, and More. Cancel reply

What is Corporation? – Definition, Formation, Types, and More

The Digital Trendz, 3 weeks ago
Gadgets

What is Write Protected Pendrive? – About, Removing, Unlock, and More

The Digital Trendz, 10 hours ago 0