Copyright © 2022 All Rights Reserved by The Digital Trendz
Home » Blog » Gadgets » The evolution of Smart TV: of first3 until 8K with a virtual assistant
Gadgets 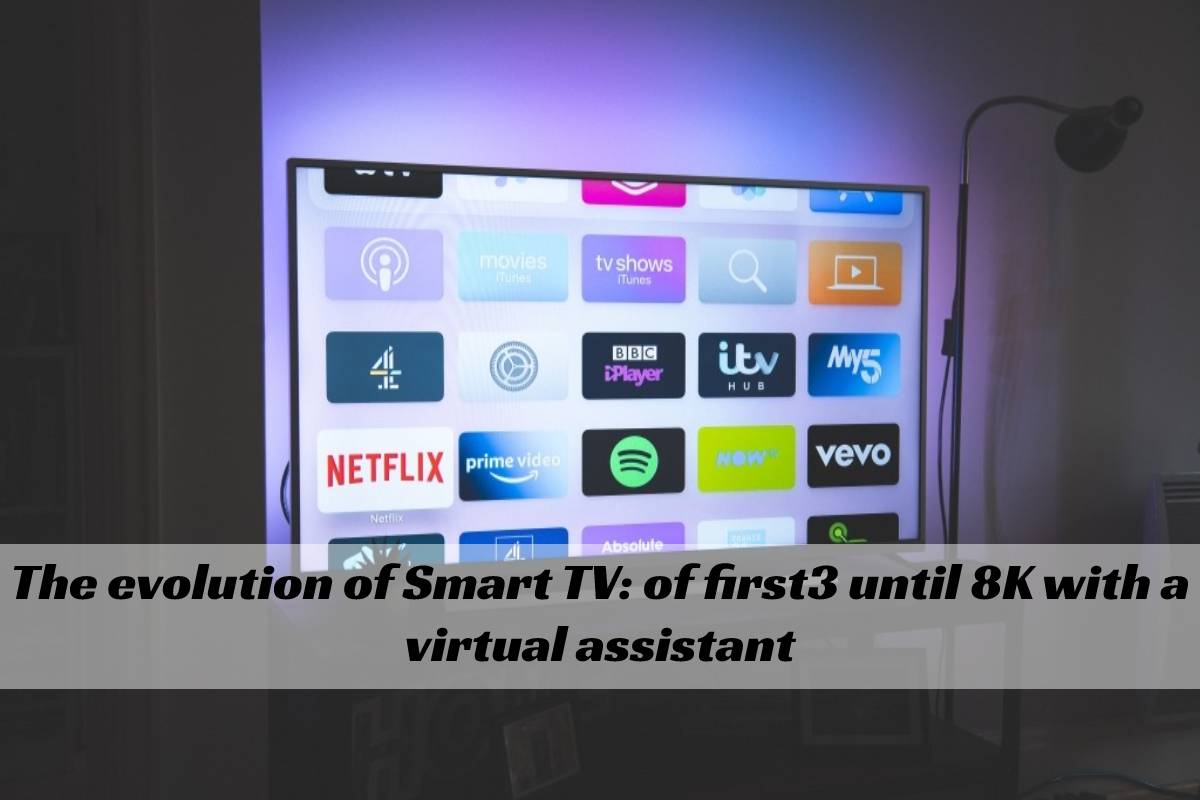 Television is present in every home, whether to connect to satellite TV providers or streaming platforms. Learn more about the evolution of televisions to the 8K we know.

The invention of television revolutionized communication in the 20th century, accelerating the process of transmitting the information.

The creation of this device, which is present in practically all parts of the globe, took place in 1920, when Scotsman John Baird developed the primary technology of television, achieving success in matters related to the clarity of images and sounds.

In 1923, Russian Wladimir Zworykin developed and patented the iconoscope, a device that later led to the creation of the cathode ray tubes that made up the oldest televisions. CRT (Cathode ray tube) monitors dominated the market until the 1990s.

The mechanism that made the CRT-type devices work consisted of an electronic gun that generated beams of electrons accelerated by a difference in potential. When being accelerated, the particles that made up the beams reached a region where there were coils.

These devices generated vertical and horizontal magnetic fields. The electric charges in motion under the action of the magnetic field were subject to a magnetic force, which caused the electrons to travel the entire length of the screen.

Upon reaching the screen, composed of light-sensitive material, the electrons left spots that, together, formed the images.

Plasma TVs revolutionized the television market, as they were the first models to feature flat screens that were thinner than the old tube TVs.

The plasma television had tiny fluorescent lamps with plasma inside – which was nothing more than an electrically charged gas. This is how the pixels on the screen were created.

Although it was a great innovation at the time, nowadays this technology is already outdated and it is difficult to find current TVs with a plasma screen. She was gradually replaced.

Contrast levels and color fidelity are excellent. Plasma TV is great for dark environments. It has a good viewing angle from different positions.

LCD is an acronym that stands for Liquid Crystal Display. This is because this type of screen uses liquid crystal to transmit images, projected by a light panel that is located behind the screen, called a backlight.

LCD is a technology widely used even today, not only in TVs but also in tablets, cell phones, and other electronic devices. Its advantage is that it is more accessible than more modern technologies and has a wide variety of colors, although it has a lower contrast level than other types of screens.

In addition, LCD TVs consume little energy and do well in bright places, as they do not reflect much.

The LED television has an LCD screen but is backlit with LED bulbs, which are brighter and consume less energy.

The real difference between the quality of the LED and LCD TV will be clearer from a 32″ TV. On smaller TVs, it is practically impossible to see the difference.

Advantages: They are among the thinnest, lightest, and least energy-consuming TVs. It has great contrast and the colors are incredibly vivid.

Disadvantages: Some models can be more expensive, often also because of their more advanced features. But, as there is a wide variety of LED TVs on the market, there are also different prices, so it is not difficult to find a model with good value for money.

The image resolution manages to get even better in the era of 4K televisions and also incorporates the applications we use on cell phones, such as Youtube and others, are the famous Smart TVs that expand the possibilities of interaction with the device.

In this line some televisions are not completely flat, presenting curvatures, to give more depth to the image.

There is no longer that idea of a unilateral TV, which is only the receiver of the message, now it is a tool for broadcasting to the public that configures its content according to its filters, which go beyond the simple act of changing the channel.

The idea we know of media fell apart. Now the consumer also sends the message and more, gives feedback on the received message.

When would you ever imagine that you could access certain websites and platforms from your TV? It may be common to those born into this era of interactivity, but ten years ago this was not possible.

Notice how companies had to expand their range of digital products – especially broadcasters – and also improve their online presence to communicate with their consumers.

In addition, many new sophisticated market niches have been created to accompany the evolution of this device, which has always been considered relevant for entertainment.

Streaming channels, many of which are currently famous – Netflix, HBO Go – are accessed via the app, guaranteeing exclusive content that is easy and quick to access.

The evolution of televisions today allows it to be a digital center inside the house, with interaction with cell phones, tablets, etc.

In addition to 4K, TVs continue to improve in picture quality, with OLED and QLED replacing LED as panel technology and 5K resolution bringing even more definition to images.

This technology we can consider as an advance of the LED TV. The big difference is that you don’t need to use backlighting, as it emits its light.

In this TV model, you have even clearer images, with a spectrum of colors and contrast that stand out. Oh, and since the OLED screen television doesn’t need the backlight, the models are thinner, and some models even have curved screens.

For those looking for innovation, it’s worth checking out.

The imaging technology, for the sake of curiosity, ensures that the image can be seen with pure black and more realistic colors, due to the system that makes its pixels self-illuminate individually, guaranteeing a high level of contrast, which can be up to 1000x faster than LCD screens.

And with all this, consumption habits will change, more and more. Just as we filter our Google searches to find sites that offer content relevant to what we are looking for, content on television will be no different.

It is now possible to ensure that you only have content of interest to us available to watch.

This is a reflection of the way we interact today, through technology, through applications that make our lives easier and that allow our social networks to be online.

It is because of this that there is a great need to be able to be found virtually. The future has been increasingly digital.

To be seen, it is necessary to UPGRADE the strategies and resources of attraction, to be able to reach this audience that migrates from off to online.

Samsung started selling its first 8K TVs in the United States with no less than 85 inches, while LG presented its bet for the sector, an 88-inch TV at IFA 2018 in Berlin.

But, even though this is a great novelty in the television market, another technology has been much sought after and applied in this sector: AI (artificial intelligence).

The 8K technology represents another leap in resolution, this time with 7680 x 4320 pixels, 4 times more than a 4K TV (double horizontally and twice vertically). There are 33 million small colored dots to form the highest definition television image you will find on the market.

The 8K technology is still recent and, like every new thing, comes to the market at a relatively high price. Since this type of TV is aimed at those with high purchasing power, you can expect many features and solutions to further improve the quality of the product.

One of the problems with a new technology aimed at TVs is that most content producers still capture images on the older generation of devices.

Thus, the user nowadays must see most of the images captured in Full HD or 4K, so as not to take advantage of the full potential capability of the 8K TV.

Did you notice that along with the topics we were citing how much the image quality has improved, surprisingly?

Well, we arrived at present and the objective still hasn’t changed, more and more TVs can reproduce better images.

But, its role has changed. In 1920, as we saw at the beginning of this text, it only transmitted images of content produced by broadcasters. Now, it intelligently presents interactivity.

Anyway, the evolution of TV doesn’t stop! And not just hers, every day it is necessary to update on some technological novelty, in different niches.

And when you are a business owner and entrepreneur, this is even more necessary. After all, businesses need to keep up with developments.

But what about you, what do you think of all this evolution of television until today? Has any positive point of it already been reflected in your routine?

With your 4K, 5K, or 8K TV, you can buy cable and internet bundles today and then have access to everything you want to watch, in addition to chatting with the television through the virtual assistant. Isn’t it fantastic? The future is already here!

Review The evolution of Smart TV: of first3 until 8K with a virtual assistant. Cancel reply